A Bamana Ci Wara sculpture, Bougouni region, unknown on Zahan, but the animal on bottom is well described in literature; shiny, brownish patina with the original attachment basket for the dance ceremony.

The famous Ci-wara antelope-headdresses, objects of rare elegance, are among the world´s best known pieces of African Art. And ever since Captain Archinard´s shipment to the Musée d´Ethnographie du Trocadero in 1882 0f one such specimen, thousands of other Ci-wara exemplares have been acquired by private collectors and public institutions around the world. Pascal Imerato has provided a useful summary of the two main style-divisions os “Ci-wara heads: “There exist two pricipal sorts of Tyi Wara Koun among the Bambara: The vertcal and the horicontal. Within these groups one finds several sub-styles. The vertical forms are encountered in the east of Bambara country; the horizontal in the west.” Imperato 1970. 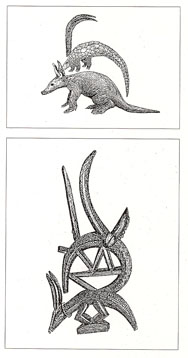