A male blolo bian Baule sculpture, standing on a fine elaborated base, shortened legs, slightly bent, the columnar torso, the thighs and arms with scarifications as well as the oval face, with an carfully carved, caplike coiffure, the angled arms holding a striated goatee, sgn of a high ranking personality; blackened, partly shiny surface.

The Blolo Blan/Bian-cult is not an Ancestor-cult. It seems to be someting which is close to that inner world, which Jung is describing, when he invented his theory of "anima and animus". For me it´s always fascinating to compare the intellectual view of western science with the spiritual experiences of african cults.WJ

Nguessan: If you had two girlfriends and one had a blolo bian and the other didn´t, wich would you take to marry?Old Man: If the two liked me, I would marry them both.Nguessan: No! You have to choose one.Old Man: I would take the one who did not have a blolo bian.Nguessan: Why?Old Man: Because of the arguments?Nguessan: What arguments?Old Man: Instead of having a rival, I would rather take the one who had none. That way we would be equals (since I have no spirit wife) (Boreakpokro, Agba region, 1994) 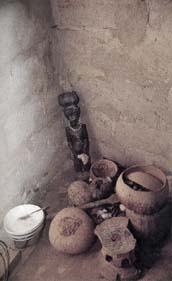