A Mangbetu Teracotta Vessel from Zaire, A Mangbetu terracotta jar with features of female physiognomy, the elongated head with a filling hole over the face, hints of breasts and large hands next to the chest area, on the base area four small faces, a small dotted decorative ornament all over the vessel.In the second half of the 19th century, Mangbetu aristocrats had a variety of finely crafted utilitarian objects - boxes, jugs, stools, musical instruments and weapons made. Around 1900, a distinct tradition of anthropomorphic sculptures associated with Mangbetu culture developed. Although these forms predate the colonial period, demand for them was greatly increased by European patrons. These works depict the elaborate reeded hairstyles and elongated heads once common among the Mangbetu, who in the past shaped the skulls of infants by applying gentle pressure.The Mangbetu are a people of Central Africa present in the north-east of the Democratic Republic of Congo. They were known for the practice of deforming the skull. They enveloped the head of the newborn in cords, before the consolidation of the bones, for a year, thus gently extending their skulls. This special form was considered a sign of beauty and intelligence. The origin of this practice dates back to the ancient Egypt. In fact, the Mangbetu are a Nilo-Sudanese people, originally from ancient Nubia, which explains the link with this practice. 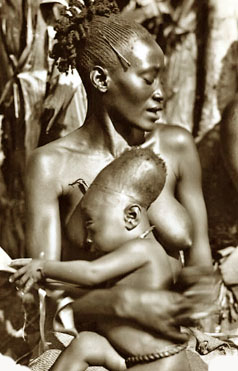